August 7th, 2009
Nothing much to say about this place. It’s right across the street from 2Amy’s, which they admittedly did on purpose to catch all the diners “pouring out” with a “sweet tooth” that couldn’t be satisfied by the pizzeria. The service is a little off-putting, and the layout is cramped and awkward as well. Think Georgetown Cupcake, but instead of having all of the choices displayed right in front of you, you have to travel down a little alleyway crowded with people to see the non-cupcake options (and menu for that matter).

The cupcakes were alright. I was able to finish them, but they weren’t good enough to recommend to someone else or to even eat again. I picked the chocolate ganache one because it was just coming into the display case. I thought this meant that it would be fresh from the oven, but that wasn’t the case. The cake on the coconut cupcake was dry and the icing too sweet. The chocolate no-fat frozen yogurt was nice and silky, similar to Costco’s yogurt. I like Iceberry better though. Don’t make the trip out here for Something Sweet. Actually, don’t even eat here if you’re right across the street. 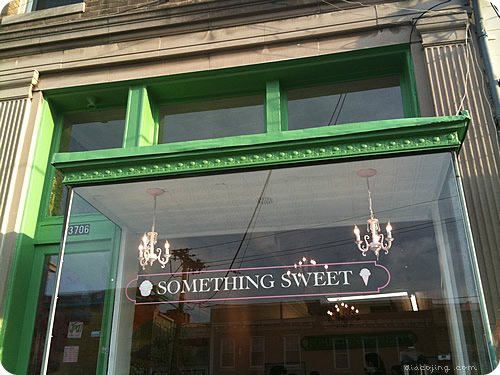