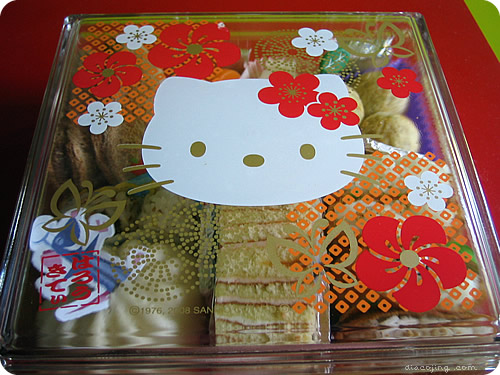 Yesterday (Aug 30th), my sister and I participated in a Fashion Show to benefit a local Autism organization. My family goes to the hair salon that hosted the show and a few weekends ago I received a frantic call from my mother — she had volunteered me to walk on the runway, representing the 1940s (the show was “Fashion through the Eras” and had 1920s, 40s, 60s, 80s, Present, and Future styles). I went to the training on the 16th and then more models dropped out and I was asked to volunteer my sister. I convinced my sister to join the Show because she had done fashion shows before for Girl Scouts and I liked the idea of having someone there that I knew to be there with me. I don’t use this salon so I didn’t know anyone here. My sister represented the 1920s, which was perfect because she had a flapper outfit from the year prior!

Long story short, my sister is shy. I made this bento to give her something to look forward to and to calm her nerves. Plus I love making and planning bento (seriously, I was planning this bento all week) and since she started college recently, she’s been getting into bento as well. I bought this bento off of Yahoo! Japan for like $5. There wasn’t anything for size comparison (though I should have read 重箱/ピクニック遠足…) and when I received it I was surprised at the size. This was the perfect opportunity to use it and I love the fact that it’s clear and that the lid is raised up so bento items that stick up can still fit when the box is closed. I felt so proud when people were asking us “who made it?”, “where did you buy it?”, and when I replied that I made it, everyone was so shocked and exclaimed it was “sooo cute!” and “a shame to eat!”. I assured them I had taken plenty of pictures before handing the box to my sister. 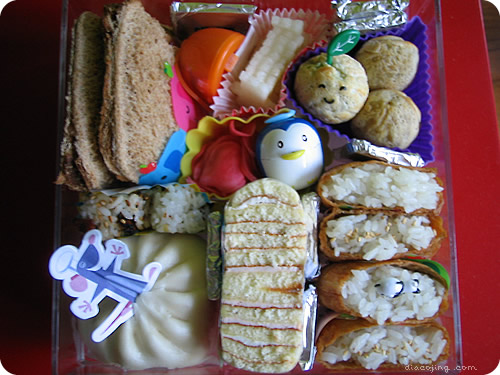 My sister and I both have blood sugar problems so i made sure to tuck in some interesting chocolates if we needed energy throughout the long day (12pm-7pm). The flavors were things like curry, chili, bacon, and so on. I also brought a diet citrus tea for us to share.

In preparation for this bento, I envisioned the box much larger than it was and had planned much more things to go inside. I was able to take my time and plod along while making this bento on Sunday morning. It took me about one and a half to two hours to make, but I was cleaning as I was cooking.  All in all, this was a great success in my opinion! We didn’t finish all of this though (cake, bao, and onigiri went uneaten). 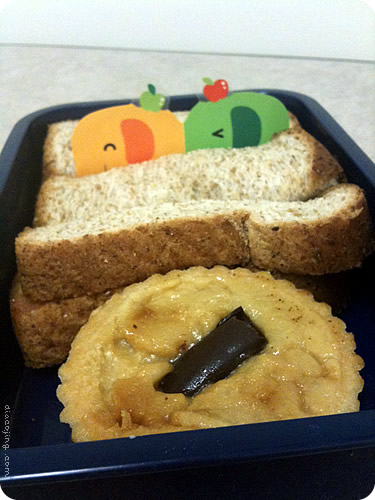 Aug 24th – I made some homemade jam and ate a sandwich of it. Cute elephant baran! The mini crème brûlée is from my friend Stephanie, who nicely gifted it to me last Friday. I thought it was going to taste like peanut butter from the look of it, but it actually tasted like lemon. 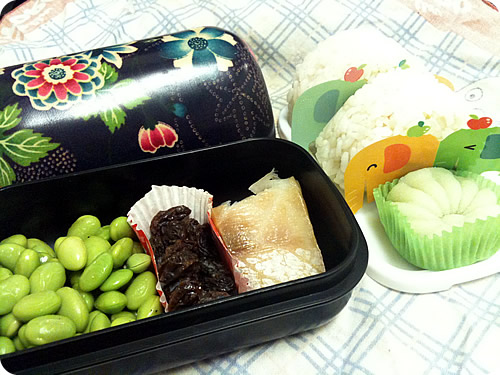 Aug 25th – I was especially efficient on Monday evening and packed up two and a half bentos using the leftover miso rockfish, edamame, and some rice I had frozen earlier to make onigiri. The onigiri is just plain rice with some pickled radishes inside and small strips of nori outside. I used a smaller onigiri mold that I got from Hana Market a while ago to make these. They fit much better than the other onigiri mold I had (now living at my sister’s house). 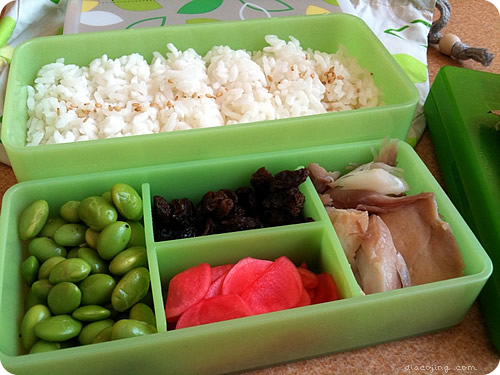 Aug 26th – I had training all day at a building I’d never been to before. The location the training was at has horrible, expensive food so I packed a wonderful bento! I love this new bento because the bottom tier holds so much and the top tier has a very useful divider. I also like the way the light shines through the bento because the plastic is translucent. Top is rice with sesame seeds sprinkled on top, bottom is edamame, raisins, pickled radish, and miso rockfish. Spiced Mate/Apricot Caramel Torte tea and a mini-CLIF bar. 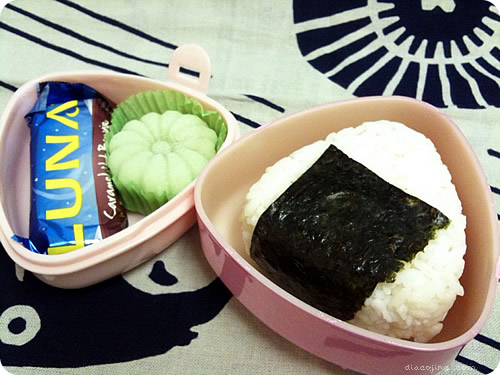 Aug 28th – Mini onigiri, Luna bar, honeydew mochi (Not pictured:  lemon chiffon yogurt). This was just a snackish lunch since I didn’t feel like making anything Thursday night and this onigiri had been made Monday. 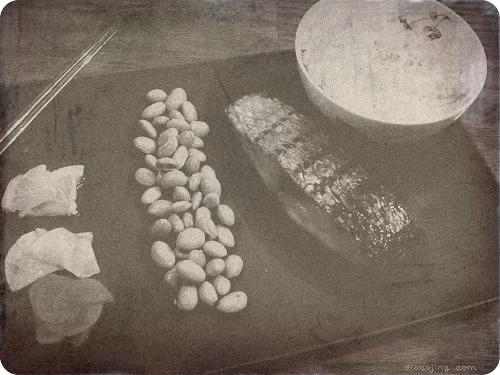 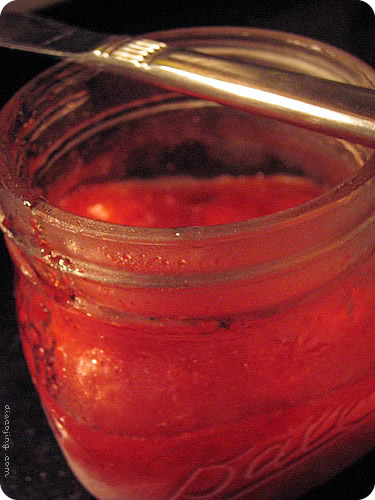 Can you believe this is homemade? And the most time consuming part was actually cutting the fruit! I picked these jars up (Ball® Collection Elite® Wide Mouth Pint (16 oz) Jars with Lids and Bands) in a 4-pack at our local Wegmans. I liked the other styles and sizes better, but I didn’t want to buy 12 or 24 jars because of lack of open space in our apartment.

I bought one container of strawberries, which yielded 2 cups of fruit, mixed it with 4 cups of sugar, a pouch of Sure-Jell pectin, and set out overnight at room temperature (after following directions on the Sure Jell insert). I then refrigerated the jars (this recipe made about 3 jars of jam). The jam was a little too syrupy (impatience?), so I froze it and it worked great! Not thick like jelly or preserves, but great on toast and sandwiches. Truth be told, I was inspired by The Bitten Word (and SeriousEats since they were featured there as well) and the fact that I was trying to make strawberry syrup for my pickling experiment. More on that later… 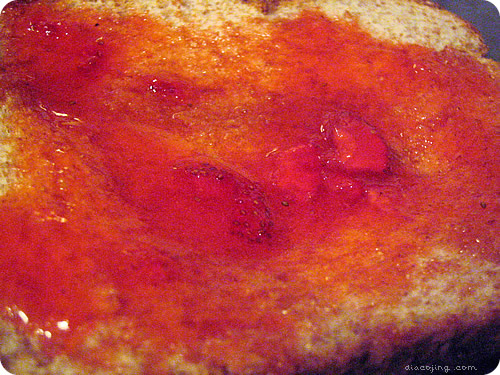 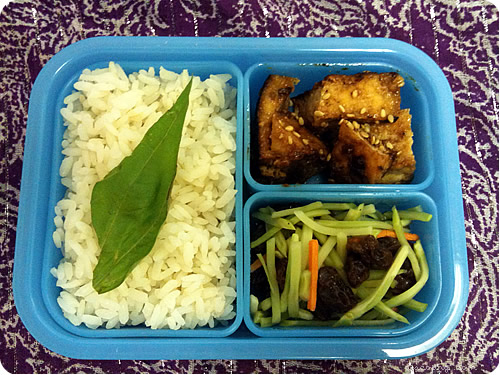 August 13th – Thankfully, this was the last of the kung pao tofu. I think from now on I won’t take short cuts with my fried tofu! (Unless it’s frozen and I’m using it in a Japanese dish). The broccoli/carrot slaw is mixed with some raisins and coconut lime dressing per the bag’s suggestion, but it just didn’t turn out right at all. The rice to the left has a home grown (boyfriend’s mom) basil leaf on it!