May 30th, 2009
I had actually heard some bad things about Lavender Moon, and thought it wasn’t worth going out to Old Town Alexandria to try some. Boy was I wrong. Right across the street from the Farmer’s Market, you know they have to have the freshest ingredients possible. In fact, they only make cupcakes that day and close when they sell out of cupcakes.

Though there were many delicious flavors to choose from the printed menu of the day, we went with S’Mores and Blood Orange Dreamsicle. The S’Mores cupcake was absolute heaven-in-the-mouth. I thought it would be too sweet and too heavy, but it was perfect. The icing on top is actually marshmallow, so it condensed perfectly with the chocolate cake and graham cracker crust.

For the Blood Orange Dreamsicle, I was a little scared at first. I had never had blood orange before, but thought that the medium of cupcake would lend itself well to trying flavorsr. The icing was a bit too sweet, but it went well with the cake. I liked that there wasn’t too much icing like with many other cupcakes I’ve tried.  The cake itself had a nice pronounced orange flavor that wasn’t too subtle yet not too strong. I couldn’t really discern orange from blood orange, and I was expecting much bolder flavors or maybe a filling since it was supposed to be similar to the ice cream bar of the same name.

The decor here is slightly barren but well meaning. The service follows in the same thread. The display case doesn’t have labels as to what each cupcake is and the cupcake flavors don’t have an explaination of ingredients, so I had to ask for clarification for every single cupcake. Instead of going through the display and answering all my questions in one fell swoop, I had to ask the same question over and over again for each cupcake: “What’s this one?”. The cashier answered me monotonously and curtly, as if she was tired of working at a cupcakery. I then repeated the question over and over, receiving the same flat response. I didn’t care since I loved the cupcakes!

Lavender Moon only takes cash and checks, and changes their menu daily to have in-season flavors. Cupcakes are $3, including tax (which is 9%!). The day I went the menu was as follows:

I almost got the Mexican Chocolate Pudding and the Boston Cream, but refrained. Though, I did relive my childhood by grabbing a Yoohoo from the refrigerated drinks case for $2. Much sweeter and more concentrated than I remember. 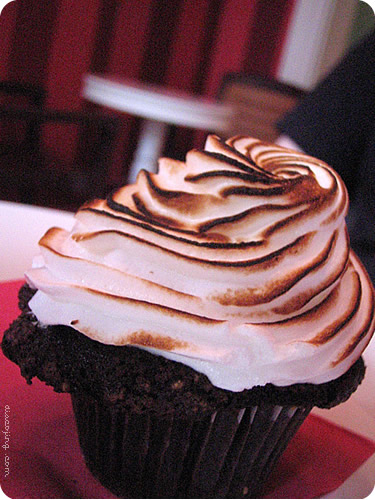