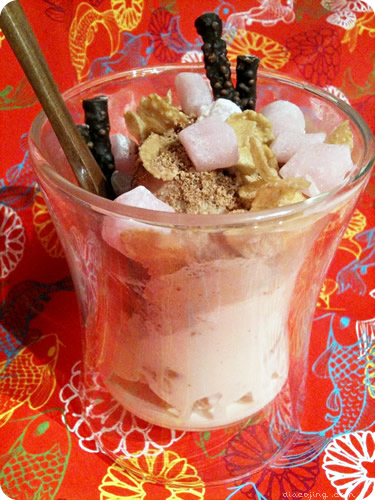 May’s Washoku Warriors challenge was to come up with a an original Wa (harmony) parfait based on the Zensai Parfait in Andoh’s book (p. 301) with 2 or more of the following: chunky bean jam, citrusy miso, brown sugar syrup, nutty miso (sweetened with ½ tsp sugar), and/or kinako mixed with cinnamon.

I chose to assemble:

I could not find kinako anywhere near where I live, so I bought roasted soybeans (sold as “soynuts”) at Whole Foods and chopped them up in the food processor.

The brown sugar syrup was very easy to make, but I had no patience to wait for it to cool, so it was left out of the parfait.

I made the nutty miso using walnuts, but found it too salty to put in an ice cream parfait. Later, I found out it was because I forgot to add the sugar to make it a “dessert” sauce!

I also chose to use koshi-an I already had on-hand instead of making coarsely ground red bean jam as suggested in the original challenge.

I made these parfaits while a friend was over and set out all the toppings in individual containers so we could make the parfaits お好み-style (okonomi, “as you like”). She had: cinnamon buns ice cream + cornflakes + red bean paste + mochi + kinako/cinnamon mixture. I shared mine with my boyfriend (pictured above) and had: cinnamon buns ice cream + cornflakes + coffee ice cream + mochi + kinako/cinnamon + “sakura branch” candies.

While it was a bit time consuming to assemble or make the ingredients, the recipes all make large quantities so you can make parfaits instantly after the initial work ^_^. All of the ingredients keep for at least a few weeks. This is also a great alternative for those that don’t like Western-style sweets and prefer a more balanced sweet/savory dessert.