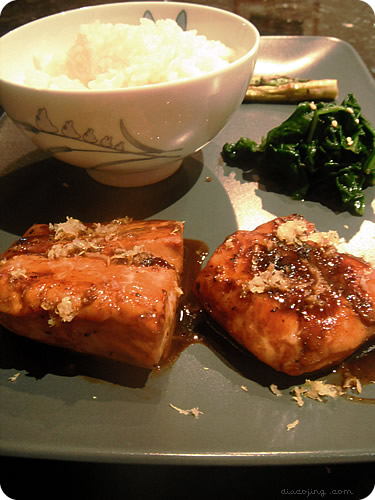 April’s Washoku Warriors challenge was Spring. We were given the option of making kajiki maguro no yuuan yaki (梶木鮪の幽庵焼き), spinach steeped in broth — hourensou no ohitashi (菠薐草のお浸し), and/or temple style chowder — unpen-jiru (雲辺汁). I wanted to try the soup, but decided on the easier fish and spinach combination.

There was an interesting story in the book about the fish — the chef chooses the different chinese characters to display on the menu, reflecting his interpretation of the dish. I chose to display the characters that are used in the wikipedia entry for this dish, but there are two other popular uses.

The fish was surprisingly very tasty, and very easy to cook. I was a little wary of this recipe since I don’t like tougher white fish like swordfish and mahi mahi (which I substituted for the swordfish in this recipe because it was less expensive). The quick marinade and high-heat cooking method made the flesh tender and it flaked apart like the fish my dad made when we were growing up. There is also very healthy because I used less than a teaspoon of oil to sear the fish in.

I really wish we had yuzu around where I live, but alas, we don’t. I also didn’t have grapefruit juice to mix with lime and lemon to mimic the flavor of yuzu, but this dish was fine with just lemon and lime. The flavors were simple and bright, but next time I’ll double the citrus amount or cut the soy sauce in half. The end result’s shoyu flavor was a bit too strong for my taste.

The fish was served with ohitashi, rice, and roasted asparagus.

The ohitashi was the least successful part of this dish–probably due to the shortcuts I took in the marinade. I didn’t have soy sauce concentrate on hand for the ohitashi, but wanted to make this dish very quickly so I estimated the ratio of salt to sugar and added some water and instant dashi granules. The result was a little too ocean-y and far too salty. I used the leftover glaze and zest from the fish and mixed it in with the spinach and it became more palatable. Unfortunately, I don’t think the ohitashi is for me, but it may just be my dislike for leafy greens. The bright green color after blanching was very attractive though.

One great positive about this meal is that I was able to make a bento out of the leftovers! 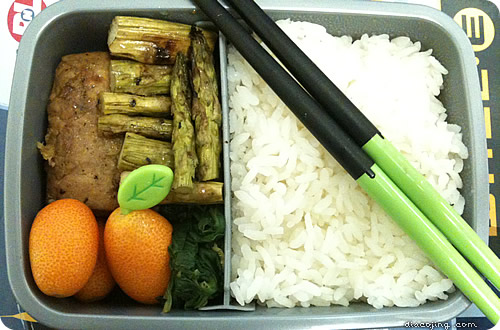