June 22nd, 2009
I heard from my little sister that there was a new cupcake place where my parent’s live (yes, I have been infecting my family with my cupcake war). The employees here are super helpful with directions and flavor suggestions–maybe because the place is empty. It’s located in Historic Haymarket, whatever that is.

To speak honestly, I think this place has a bit of an identity crisis. It sells cupcakes, but you wouldn’t know that right off the bat from walking in. They cater cakes, teach etiquitte classes, and also sell items you’d find at a local Hallmark.

The items on their “Daily Menu” aren’t accurate, so don’t use that to order, lest you be required to re-arrange your order all over! Since I was wearing a DVAM shirt, the cashier suggested the Breast Cancer Awareness Pink Champagne cupcake (because all ribbons are the same I guess). The cake was similar to angel food cake and actually tasted like it came from a box mix. There was too much icing–in fact, my sister had a dollop of it on her nose! I scraped the icing off, and it worked well to balance the dryness of the cake, but it was too sweet. I couldn’t taste any champagne.

The other flavors I got were Red Velvet, Snickerdoodle, and Strawberry Shortcake. The Strawberry Shortcake completely slips my memory other than the fact that it was interesting and nice–I liked that there wasn’t too much frosting. My mom also had the Strawberry Shortcake and she said it was excellent. It’s a slightly dense vanilla cake with a later of strawberry preserves on top and a ring of icing around it. The Snickerdoodle was a cinnamon cake that resembled a muffin or bread more than anything. Again, the icing was too sweet and I scraped it off. Red Velvet also tasted like it came from a box and shockingly, did not have a cream cheese frosting!

It’s a nice place for stay-at-home moms to visit, but it would work much better in one of the up and coming shopping centers in Gainesville, rather than off the beaten path. I’m glad there is a place like this in the area, but I like the Washington, D.C. establishments much much better. 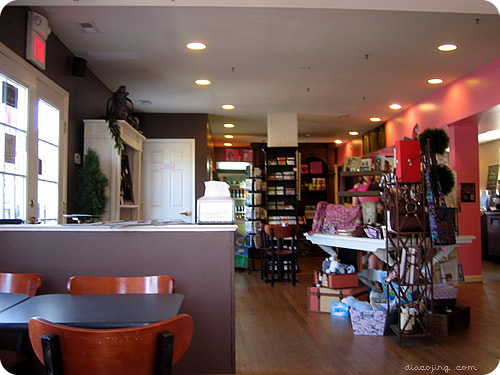