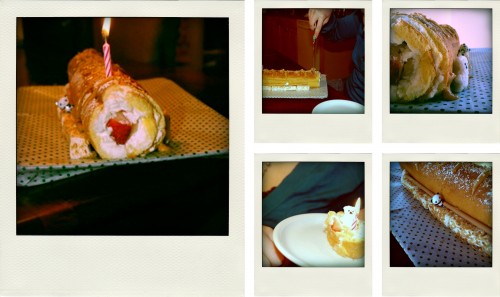 My sister and I are huge fans of a local Korean bakery, Shilla Patisserie. There are many locations around where we live, so we often either meet their or stop by whenever we’re in the neighborhood. My family often purchases one of Shilla’s delicious and beautiful cakes for family get-togethers. One of these type of cakes is called “Roll Cake”. I recently purchased a book called くるくるロールケーキ Kuru Kuru Roll Cake from Kinokuniya in New York City. Kuru kuru means to spin or wind up, which is appropriate because the cross-section of a roll cake looks similar to a lollipop or pinwheel.

Even though my sister’s birthday is in December, she often celebrates her birthday later so that family and friends are back from vacation.I wanted to try to make a Shilla-style cake using the book I recently purchased. If I messed up, I could always just stop by the bakery on the way and pick up a real cake, right?

Unfortunately, I totally forgot that I didn’t have the special 30cmx30cm pan, Japanese super-fine sugar, a kitchen scale, and the types of eggs I had would probably be too big. These are some of the many problems that arise when cooking recipes from other countries. I also had to translate this recipe. Let’s be honest–I’m not familiar with Japanese kitchen vocabulary at all!

Here is my version of the simple Strawberry Roll Cake with substitutions/conversions below.

Combine egg yolks and 20g(4 1/4 teaspoon) of granulated sugar. In a separate bowl, whip egg whites and remaining granulated sugar until it forms stiff peaks like a meringue. Add the yolk mixture to the whites, combining gently. Sift the flour in, mixing from the bottom to the top to make sure everything is incorporated. Add the melted butter and mix thoroughly using a rubber spatula. Make sure there are no bubbles in the batter. Add batter to a pan lined with two layers of parchment paper with slits cut in the corners so it lays flat. Smooth out the batter with a card, bake @ 200 degrees Celsius (392 f) for 12 minutes. Cool on a wire rack.

For the cream, put the beater and bowl in the refrigerator until cold. Add the cream and sugar, beat for 6-8 minutes until thick. If you beat too long, it’ll turn into butter, so be careful!

Flip the cake over and remove the parchment paper carefully. Spread cream on with knife and fill with desired fruit slices. Roll 90 degrees (I rolled mine tighter, so it was really skinny!) using parchment paper on the outside. Once it’s rolled, keep rolled in the parchment paper for at least 30 minutes before cutting into slices.

I topped the cake with homemade dulce de leche and some toasted coconut. Toasted coconut marshmallows lined the side with milk tea pocky, some panda picks, and a bear-shaped marshmallow! (My sister’s nickname is “Bear” and one of her favorite animals are pandas) It tasted very good, but I don’t know yet if it was quite worth the effort. Granted, most of the effort went into translating and converting measurements. Now that I have a kitchen scale, it should much easier, right?

Unfortunately, due to the snow, her party was canceled! This cake won’t keep for long because of the cream in it, so I drove it out to her the night of her would-be-party so my family could enjoy it. I took a slice for myself and placed it in my French Postcard bento–that’s two slices I got to take because I had to make sure it tasted good before decorating it ^_^ 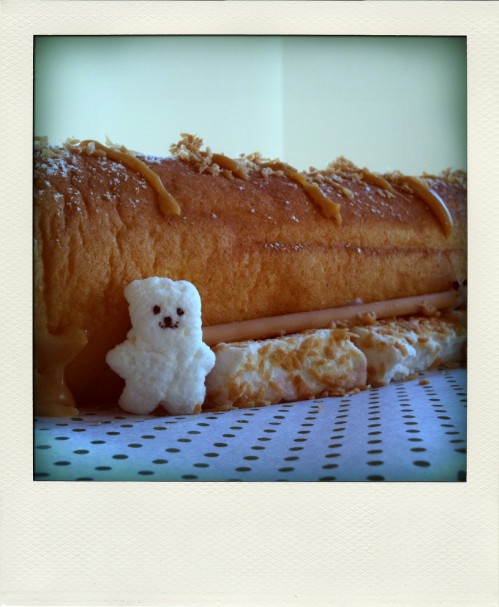 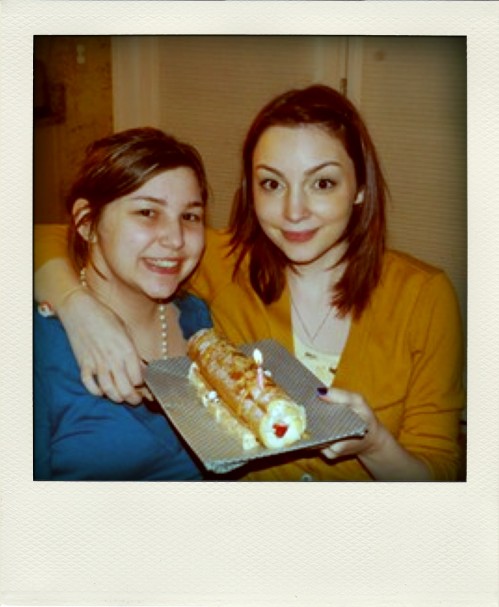