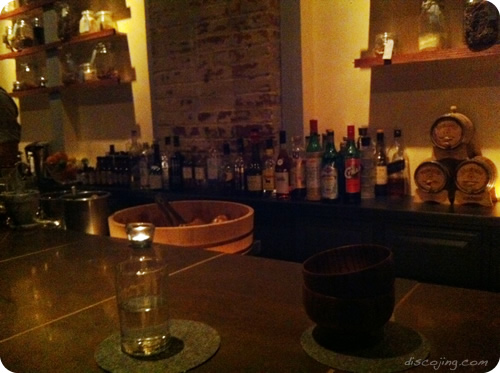 My boyfriend took me here as a surprise to celebrate my 24th birthday.
I knew it was easy to miss, but we completely missed the door and walked all the way to the back of the restaurant before we flagged someone down. They went to a side door, knocked on it, and slid it open.

The host ushered us in and we got the last two seats at the bar. She pulled the chairs out for us, warning that it was a tad like “tetris pieces”.

Right when we were seated, we were given orange and clove scented hand towels, which really reminded me of Christmas time as a child and making clove-studded orange ornaments for the tree. We were then served a hot buttered rum with a fat wash and cinnamon stick. It warmed you from the inside in more ways than one and went down smoothly, They were served in small glass cups with handles on them and raised decorations, the type of cup that you would serve a festive holiday punch such as egg nog in. Throughout the menu we were served a cool and refreshing cucumber water. I don’t like cucumber or water, but this water was delicious and cleansed the palate when needed.

We waited a few minutes for the next drink, which was a deep red/purple drink with celery bitters, vsop, dubloodner(?), and a soaked olive. I don’t like any of the things in the drink and actually hate olives and celery, but this drink was good. The drink was served with a bite from the kitchen: crostini with Cabernet reduction, chicken sausage, and parsnip purée. It was good, but just a bite.

Next, we got the opportunity to talk to Derek and explain what types of flavors and profiles we like, then he custom made our next drink. I got a December 5th repeal day drink using Canton ginger liqueur, repeal day bitters, lemon peel, and brandy. My boyfriend said he liked gin and received a drink that came with the following intro “GQ says I make the best dry martini in the US.” It was comprised of Plymouth dry gin and dry vermouth. I don’t like either, so I didn’t try it, but I heard good things about it. We were served a small bowl of truffle popcorn with this dish. Other drinks I saw being made were the Corpse Reviver #2 and a Pomegranate Manhattan.

We were then told that our menu was concluded, but we had the option of extending it. Of course we opted to extend it and Derek set upon making our second custom drink. I got a brandy Alexander with creme de cacao, VSOP, and nutmeg. My boyfriend got a twist on a dark and stormy I believe with really spicy bleinheim Ginger ale, lime, and something else. It was served with a bent stainless steel straw, which made the whole drink have a certain retro refinement and whimsy.

I would love to go again, it really is a great experience! It is a tad pricey though, and you need to go with someone that likes mixed drinks and that you like talking to. The service here is great, but there is only one bartender for the whole room (10 people at the bar with a back row as well), but when he works he way to you, he actually listens to what you say. I would recommend getting there either early or late so you can get a seat at the bar. This way, you can see the hand cut ice blocks, the quilted glass beakers, all the spices and ingredients lined up on the wall, and the swirled, long metal stirrers in their full glory.

The decor is transporting–a mix between a retro laboratory and a speak easy pharmacy. The music was a bit mis-matched when we first sat down, but as the playlist continued the music became more representative of the decor and worked to create a cohesive atmosphere. It really felt like a safe, secret pocket of intimacy hidden away from the hustle and bustle of the cold, blustery city night that was waiting right outside. 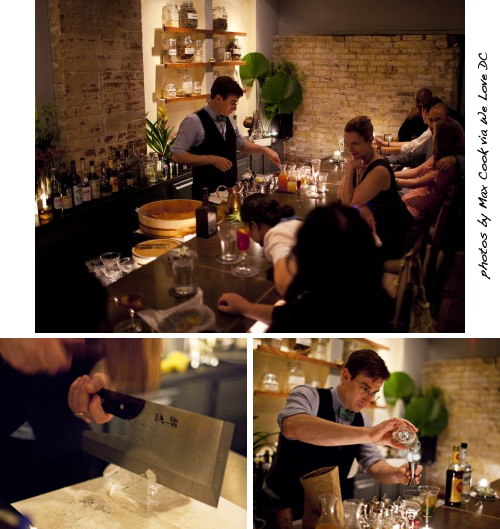