co co. sala is a new ‘restaurant’ in Penn Quarter (near Chinatown/Verizon Center & Metro Center metro stops). It’s the 21+ Melting Pot, where they serve food, but the main draw is the dessert and drinks. If you don’t want to sit at the bar (and have people hovering behind you), make reservations ahead of time because ever since this place was reviewed by the Washington Post magazine, it’s been packed. We sat at the bar, but it’s full service and also right next to the kitchen window so we were able to witness all the yummy coffee and non-coffee drinks exit from the bar and crab cakes and delicious three course desserts from the kitchen. This dimly lit lounge with two bars and lots of sitting room has large televisions with images and movies of chocolate playing and the waitstaff is dressed in brown shirts for men and low-cut red wrap-arounds with black shorts for women. It’s a great place to end your trendy night, whether its with your girlfriend, on a first date, or with friends. The atmosphere is not apt to meeting new people, but it’s great to spend some intimate time with friends or dates. Since most of the food and all the drinks have chocolate or coffee flavors or hints in them, it’s a great place to indulge.

To end our night, we chose a three course tasting menu from the “Monde du Chocolat” dessert menu called “Co Co Grownup”, which was a re-make on ‘childhood favorites’. You could also choose the main dessert seperately if you didn’t want the tasting menu. These desserts look small on the menu, but it was meant to be shared! With a mini boston cream doughnut with cappuccino panna cotta, milk chocolate-pb & banana
foster split with mini co co. cupcake and a malted shooter, and a mint chocolate chip cone with strawberry cheese cake lolly and pop rocks, I was close to being in diabetic shock! I never thought I would say this, but it was almost too much chocolate!

I am glad that I live in an area where I can visit a “chocolate lounge” if I want to! I love unique places like this and hope more keep appearing.

Everything is made fresh here, and some bars (there was a small half bar to the side) have viewing windows where you can see the chefs making chocolate. The entrees also have recommended ‘elixir’ (drink) pairings for each choice. 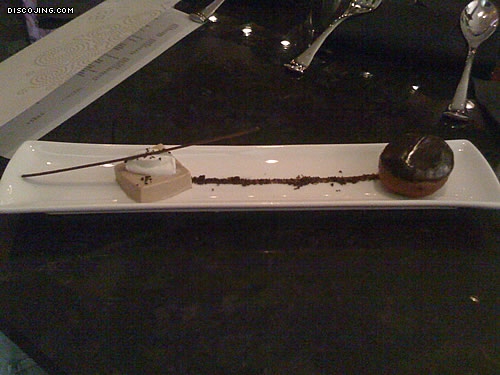 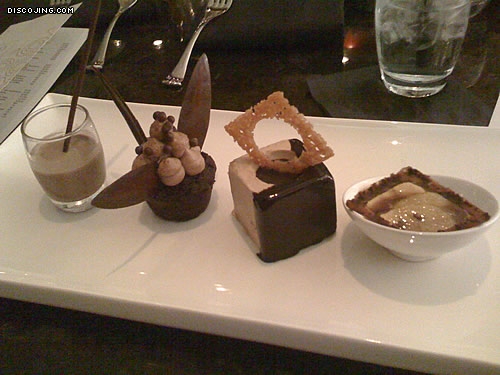 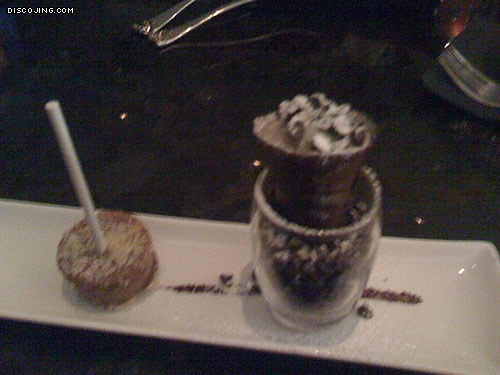