So I had an excuse to FINALLY bust out my new bento (haven’t used since I bought it in Japan in August!)
I thought this baby would be too big for me, but that one extra compartment is perfect!
Since I’ll be making bento for myself the next few days, i figured that it would also be nice for me to make it for my sister and brother. Though, I didn’t tell them I was doing this, so hopefully they know.

I had originally planned to make Katsudon, tempura-ed pork cutlet on top of rice with an egg on top that cooks itself with the heat from the rice and pork, BUT the pork was NOT cooperating. My dad made me get pork from target so it was super thick and he lost his meat tenderizer so I eneded up SOMEHOW flaying these pork cutlets.
Another experimental thing was that I tried, like cookin’ mama says, to put them in egg>flour>pankc (bread crumbs) but I think i put too much flour on it so the panko wouldn’t stick! My dad also hid the rice from me so while I was looking for it I kinda burnt the tonkatsu (hacving to cut off the black-ish ends) and kinda ‘baking’ the bottom of my ome! [but it was okay cause i got to use my cool cool omelets pan from the Japan dollar store!]

I made my sister and brothers the same. My sister’s is in a horizontal rilakkuma bento where my brother’s is in a vertical tiger bento (actually my sisters). 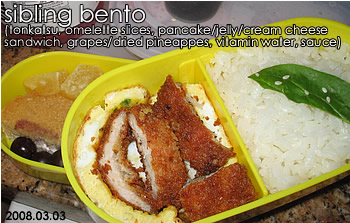 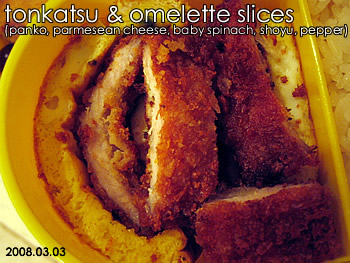 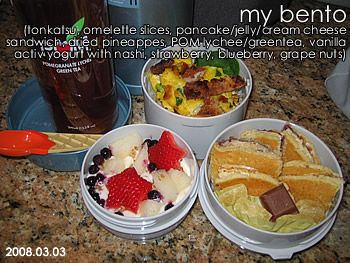 I actually ran out of omelette and tonkatsu for MY bento so i got extra sammies.
the picture pretty much explains everything BUT i forgot to say that I put a little ritter sport cappachino (sp?) square in there. which reminds me… i wanna try pancake sammies with nutella! (too bad my house doesn’t have any) nutella and banana pancake sammies, yummy~!

oh, and after i gave up on katsudon, i wanted to make little rolls with the egg rolled around a tonkatsu strip but i baked the ome too long and it broke when i tried to roll it.
on another note, i bought these nashi (asian pears) from target and they looked fine on the outside but they were MOLDED on the inside. I cut around the molded center and tasted them and they tasted okay (hopefully they are).

tomorrow i will make pork in soy sauce (chinese dish) with butternut squash! i bought some today cause i was craving it. funny thing is… i’ve never made it! (trust me, i tried to find canned squash but they didnt have it).

i thought this bento would be super quick but i took my time and kept getting side tracked and encountering obstacles so it actually took be about 2 hrs (cleaning included).

ingredients
tonkatsu: pork, panko, flour, egg (2), vegetable oil, tonkatsu sauce
ome: egg (3), baby spinach, dash of parmesean cheese, pepper, panko, soy milk
pancake sammies: whole grain pancakes, cream cheese, grape jelly
nicole’s yogurt: strawberries (yuck!), blueberries, nashi, vanilla activ yogurt, grape nuts
I thought I was pretty good on my bento in keeping healthy (just a drizzle of sauce and i snuck veggies in the omelet) and i also kept with bento rules of having equal colors. though the bento was really yellow/brown I added in green with the baby spinach leaves and blue and red with the fruit (though i don’t like strawberries!). i also am drinking pom juice instead of vitamin wanter.

I HAD to make a bento–I’m volunteering for Japanese class tomorrow! (i guess today since its past midnight)

Latte update
Okay, I couldn’t wait guys. I got a honey latte @ my starbucks on friday night, and lets just say its not for me. Maybe its because i got it w/ skim milk and no whip? I wanted coffee with honey in it but it tasted like tea! watery tea with a kinda nutty honey aftertaste.
SO i went to the starbucks in the super-target today (Sunday) and got a chai latte, and i hate to say this starbucks, but i like greenberry’s chai latte better! starbucks’ is actually really spicy. too spicy! i think greenberry’s has the perfect blend.