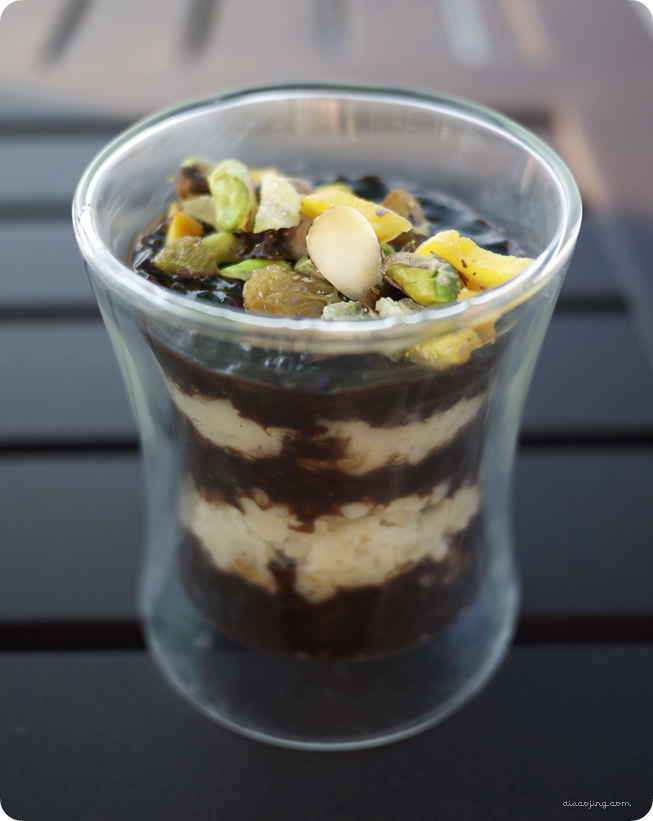 Growing up, we would take whatever rice was left in the rice cooker after dinner, add milk and sugar and nuke it in the microwave until it was nice and hot. For some, rice pudding can be polarizing. My dad thinks that it is blasphemous to make this meal staple sweet instead of savory; my boyfriend hates the consistency. I, on the other hand, love rice pudding so much that I visited a rice pudding restaurant with my sister when we visited New York City.

These two rice puddings combine some of my favorite flavors, especially with the crunchy, chewy topping. Since my family and friends are all lactose-sensitive, I opted to make this rice pudding dairy free. The flavor that the almond milk imparts onto the rice, blended with the warm spices of cardamom, cinnamon, nutmeg, chai, and chocolate make something really special. I also used a special chai-cocoa powder I picked up when I visited San Francisco a while ago to deliver the chocolate punch, so this pudding is full of memories for me.

Trust me when I say this this pudding is as fun to look at as it is to eat! It is lighter than most other puddings I’ve tried since it is non-dairy. Which just means you can have a bigger serving ^_^.

Again, thank you to Marx Foods for the delicious Italian Organic Integrale Rice, and thank you all who voted me in to Round 2 and made it possible for me to create this delicious dessert. Please check out the other entries in Round 2, they all look delicious! Good luck to The DelGrosso Food Blog, Cookistry, Girl in the Little Red Kitchen, Oh Cake, Chez What?, Food for Thought, The Upstart Kitchen, Great Outdoors Cooking, Creative Cooking Gluten Free, and me of course.

Combine the milks and chai concentrate. Add ½ cup rice (180ml) and all but 1 ½ cups liquid; bring to boil and stir for about 15 minutes. Lower the heat and add in the remaining liquid in ½ cup amounts until fully absorbed and the rice is soft (about 20 minutes). Combine remaining  ingredients and stir until incorporated. Remove from heat and allow to cool until set.

Combine ½ cup boiling water and rice in a pot; cover and cook over medium-low for about 10 minutes. Uncover and cook until water is absorbed. Add in another cup water (180ml measure) and stir until absorbed. Meanwhile, combine the sugar, cornstarch, and salt in a small bowl. Whisk together 2 tbsp almond milk and one egg yolk in a separate bowl, then combine with the dry mixture. Bring remaining almond milk (except 4 tablespoons) and the ½ cup coconut milk to a boil in a small saucepan. Meanwhile, add the remaining liquids (¼ cup coconut milk, ¼ cup water,  ½ cup almond milk) to the rice and stir until incorporated. Gradually add hot milk mixture to yolk mixture, stirring with a whisk. Return milk mixture to pan. Bring to a boil, and cook 1 minute, stirring constantly, then add to rice. Stir in vanilla, spices, pistachios, and raisins. Set aside to cool.