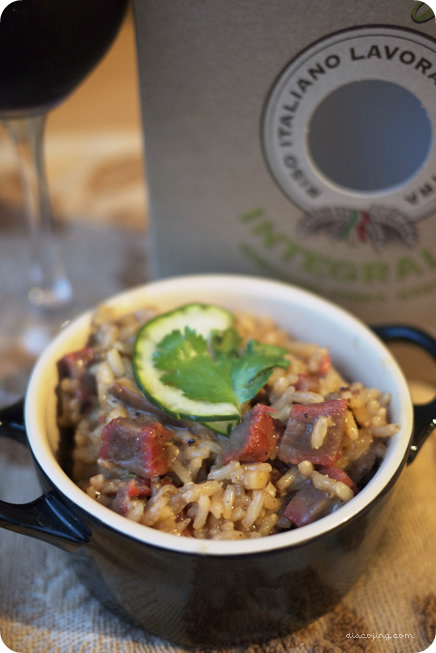 A few weeks ago I entered to be part of Marx Food‘s The Integrale Gauntlet. At first I was very intimidated by the title, but that’s probably because I’ve been watching a bit too much medieval-themed TV shows recently. The more I read about the “Gauntlet”, the more excited I became. This challenge is “all about rice”, one of my favorite foods!

After I entered the gauntlet, I was sent one kilo package of Italian Organic Integrale Rice — my mission was to make an original savory risotto.

Though rice is one of my favorite foods, I’ve only made brown rice a few times and risotto only once. Ashamedly, the one time I did make risotto was from one of those instant risotto packets back when I was in college. I’ve always been intimidated of risotto–the care and attention it takes, as well as the reputation it has for being so easy to “do poorly” or “just wrong.”

Luckily, Marx Foods has a good framework that broke down the process into general steps, noting when embellishments could be added. Using their steps as a guide, I formulated a recipe using some of my favorite flavors and inspired by a recent trip to a new dim sum restaurant nearby.

I chose to make a risotto with shiitake mushrooms, ginger, water chesnuts, pickled cucumbers, cilantro, scallions, and char siu (chinese roast pork). The end result was something that was creamy and rich with the taste of good memories though balanced with acidity and crunch from the vegetables.

For my first time making risotto from scratch, I was quite proud of myself. This is a great healthier version of risotto with it being organic and brown, and it has the added bonus of being a one pot meal!

This dish paired well with a deep red wine we picked up at the local store; the flavor of the wine helped cleanse between bites of the risotto since the char siu was quite fatty. I used about 2 cups (my rice cup measures 180ml) and had generous dinner and lunch portions the next day for two people.