I have visited McCormick & Schmick’s twice, and M&S Grille once. The scores may seem a bit harsh for a restaurant that has a pretty good reputation in general, but I don’t want to waste my time any more at this establishment in order to get a less biased score.

The first time I visited McCormick & Schmick’s was with a Restaurant.com certificate at the Mclean (Tysons Corner) location. We had never tried oysters before and thought it a great chance to sample a bunch by getting the 7-different-types-of-oyster sampler. Until recently, I have been turned off of oysters because of this experience (healed by a trip to Japan where I ate clams and fried oysters at Ceiba). The oysters were slimy, salty, and not fresh at all. There was no flavor to the oyster itself, just the taste of briny ocean (or bay?) water. All in all, a mediocre experience and they made us feel cheap and like little kids when we presented our gift certificate.

The second time (9/17/08) was at the Chinatown location, again with a gift certificate. [I think I’ve established that this restaurant is –not– worth paying full price for.] I ordered the Sea Scallops and Ginger Pink Lemonade; my boyfriend ordered Fried Oysters and a beer.

The service at the bar while we waited for our table was fine (reservations are a must), but the service at our table was horrible. Our waiter didn’t know anything about any of the drinks (I specified that I wanted a mixed drink with ice as opposed to a martini because martini’s are not as enjoyable for me because of their flavor singularity and strength) and then because of this explanation, I received a Pink Ginger Lemonade (pink lemonade and ginger vodka) that was very weak and basically a waste of $8.50. Not to mention the fact that he looked at my boyfriend’s ID for a good, solid minute before handing it back to him.

The food looked a little eerie when it arrived; small, rubbery, chewy and flat-flavored scallops spread in a circle around the plate with artichoke leaves and a pile of congealed, plain, and poorly spiced potato slices in the center—all atop a thin, flavorless sauce; Crispy-looking but slightly mushy inside fried oyster strips with tartar sauce and thick steak fries and coleslaw. The scallops actually seemed to have bits of grit in them as I was chewing them and I couldn’t finish the five small scallops I had and the artichoke leaves tasted like buttery grass. The first oyster strip I had (with tartar sauce, mind you) tasted like a low-class version of it’s Ceiba cousin but the second strip I had tasted horrible and I ended up spitting out the green-ish gray mush onto my plate and ate a couple out-of-the-grocery-store-bag-tasting fries to get the taste out.

Before dinner, we had hard, stale bread (but were starving so scarfed it down) with cold, plain butter and at this point, I was getting sick from the horrible food. Not to mention that the waiter never checked on us, and when he brought the food said ‘Excuse me’. Usually that just means the food is here and he’s going to pause our ongoing conversation while he sets the food down and asks us if we need anything, but no, he kept the plates hovering and when I looked at him, he said ‘Move your plate please’, in a condescending voice I would use when talking to a six year old child who didn’t know any better. (Which is particularly offensive to me since I went to etiquette school). So I moved my plate out from in front of me, to the other side of the 4 person booth table. He also looked down at us when we tried to give him the gift certificate, saying he would ‘get it later’, and when we were done with our food, we had to ask the bus-boy to get our check for us. The waiter dropped the check off as he walked by, not even giving us a chance to tell him about our horrible experience or ask if we wanted refills or dessert.

The decor is also bad here. We sat at a too-high table with a picture of a trout at it, but the wall-paneling and clunky lights + fish shaped bronze sculptures ‘swimming’ up the walls was still better than the slightly lower-class Mclean location.

The “daily fresh-catch offering can’t be beat” say habitués hooked on this “clubby” chain “classic” where the “plethora of choices” “cooked as simply pr as complicated as one would like” and “knowledgeable servers” make it “a safe bet for a biz lunch” or “excellent for a family celebration”; though the “dissapointed” suggest that the “overpriced”, “uninspired” “fish factory” fare is a “let-down”, barflies insist that “great specials” during happy hour deliver “real value”. 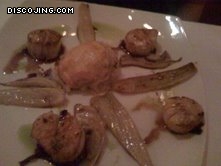 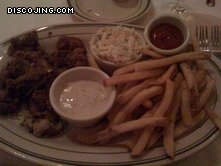 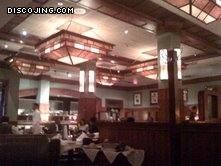