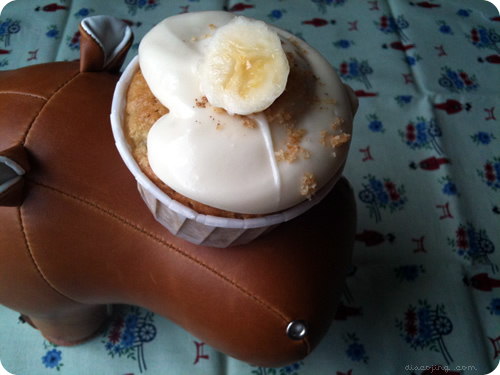 Last week, I organized a surprise “Happy 20 Years” party for my boss. Everyone at my office loves partaking in potluck parties, so we made it a secret potluck. We had just had an impromptu potluck organized by my boss the week before, and I had made mini blueberry cheesecakes.  I had to think of a way to “top” my mini blueberry cheesecakes, but still be able to complete the dish on a weekday night and transport it easily to work.

Last summer I made traditional banana pudding for our summer picnic and a lot of it went uneaten. I think that it was because we had far too much food and no-one could really tell what mine was because that’s the nature of banana pudding! It’s yummy goodness hidden under a layer of whipped cream.  Banana pudding is one of my favorite desserts, so I chose to translate them into cupcakes. When trying to construct the ‘cake in my mind, my boyfriend said “I don’t know why you like cupcakes so much…” (he’s a pie guy at heart). Thankfully, he ate his words later and proclaimed “I think this might be the best dessert you’ve ever made!” 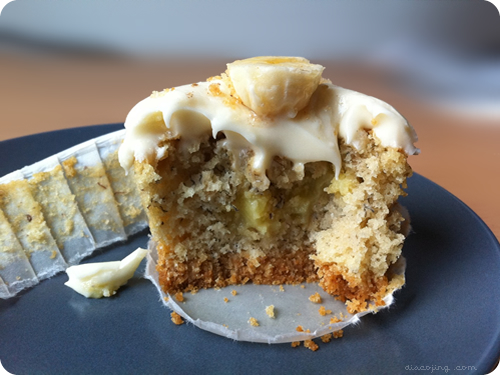 Melt the butter. Pulse cookies in food processor. Pour in melted butter until combined. Scoop crumbs into cupcake liners and press down with a thin glass (or your fingers). In a large mixing bowl, cream shortening and sugar. Add the eggs, vanilla, bananas and buttermilk. Combine the flour, baking powder, baking soda and salt; add to banana mixture. Fill 18 paper-lined muffin cups two-thirds full (or with large batter scoop). Bake at 350 degrees F for ~20 minutes or until a toothpick comes out clean. Remove to wire racks to cool completely.

Use an apple corer to remove the centers of the cupcakes, being careful not to go down too far into the the cupcake. Fill with vanilla pudding (I used Jell-o Instant) and top hole with cake you removed earlier. Frost with caramel cream cheese frosting, dust with cookie crumbs, a dash of nutmeg, and a slice of banana.

Heat brown sugar, cream, butter, salt over medium high heat whisking until sugar is dissolved. Cook for another minute. Pour in alcohol and stir to combine. Take off heat and let cool. In the bowl of an electric mixer, beat cream cheese and butter until soft. Add the confectioner’s sugar and beat to combine. Add three tablespoons of the bourbon caramel and beat to combine. If you have more than 3 tablespoons of caramel, taste the frosting. If you want a stronger flavor, add the rest of the caramel.

I tried to pipe the frosting on the cupcakes, but I chose a tip that was too small. By the time I cut another hole in the bag, the frosting was too warm and kinda spilled onto the cupcakes (whoops!). People at work specifically requested this frosting, which I made in the winter for Egg Nog Cupcakes, so I figured it was better to have too much frosting than not enough.

p.s. All pictures taken in this post were with my iPhone 3GS, except the cross section shot before the cut, which is with my boyfriend’s iPhone 4. His looks absolutely amazing in comparison to mine!