So for some reason I was really craving Boston Creme Pie. Then I thought “Hey! I can make them in cupcake form!” Now, I’m the kind of person where I’ll lay awake at night just thinking of all the different ways I can make something or all the different things I have to do, so it wasn’t really the greatest thing ever that I had a while to plan these. Many things went wrong with this recipe. I used really moist cake (‘with a cup o’ pudding in the mix!’) and then made custard from a box, which sort of just blended in with the cake since it was the same consistency. The ganache recipe was slightly too bitter and I didn’t melt the chocolate enough, so it wasn’t tempered correctly. It was still slightly bonded together, but not… the oil was seperated so it wasn’t smooth enough to dip the cupcakes in. Everyone I asked said that it didn’t taste like a boston creme pie or bavarian creme donut, so I guess I failed in that regard. Also, for some reason, all the silicone containers refused to release the cake, so I lost a few to that. I brought these cupcakes down to UVA for my sorority sisters (and left some up here for Dan), and they all seemed to like ’em! 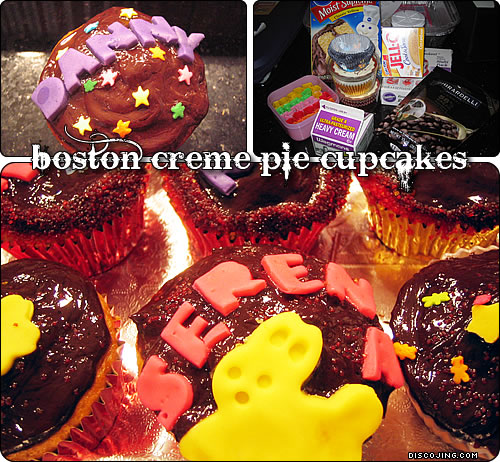 Mix cupcake mix and follow directions to fill liners and bake. Once cooled, either pipe filling in with piping bag or nozzled bottle, filling cupcake three times  (Using the cone method might be better so that you get more filling. I thought using the cone method wouldn’t work because I would be dipping the cupcakes upside-down in the frosting, but that didn’t pan out. The cone method is using a knife to cut a circle at a 45 degree angle, then removing the circle, cutting the tip of the cone off, filling the hole and then replacing the circle back on top of the cupcake. This way you can really control the amount of filling that goes in).

Combine chocolate chips and creme over medium heat (using double boiler method or placing heat-safe bowl in a saucepan filled with 1-2 inches of water) until smooth and shiny. Let mixture stand 2-3 minutes and then start dipping cupcakes in the ganache, upside-down. Twist and then quickly flip the cupcake to prevent dripping (like dipping strawberries at godiva ^_^). Allow ganache to set for 5 minutes and then decorate. I used sprinkles and fondant shapes. Unfortunately, the frosting was still hot when I decorated so the sugar sprinkles basically melted into the frosting and the fondant got all melty. I used the ganache recipe from Georgetown Cupcake.