This is an update of a previous review.

At the request of the manager, I went back to visit La Sandia for an “eight course tasting menu to showcase the traditional ingredients they use while executing dishes in a modern way”. I didn’t know this the first time I went to La Sandia, but they’re in the Zengo family, and I love Zengo (despite their refusal to change the statement zengo means giving and receiving in Japanese, even though I told the marketing manager that it in no way or interpretation means that and means before and after, but I digress). Long story short: take this review with a grain of salt. This is not going to be the average dining experience since I had the manager(s) personally visiting after every dish and asking my opinion, and the waiter and chef were made aware of my presence ahead of time. I try to keep my opinion objective as possible, taking into consideration my previous experience, the taste of the food itself, and the decor. Also keep in mind that I don’t have a real taste for Mexican food (in general).  Namely, I like a few other cuisine types (including Asian) far better.

It seems as if this La Sandia is a different one than I visited before. There are the same decorative lit walls made to look like stained glass here and the menu still has the Cobb salad and sangria, but it just feels different. There still is something that still doesn’t quite work here, maybe I can’t get over it that this restaurant is in a mall, but the vibe has pulled together nicely and the restaurant is considerably full for a Wednesday night. Our server, Alex, is attentive at all the right moments and even adds a dish at the end of our meal “because he likes chocolate too”. The manager who meets us before and after each course tells the dishes’ stories effortlessly, as if he farmed the ingredients and cooked them himself. The other manager lingers a little too long and seems a bit nervous, but it’s fine. Chips and salsa are brought out, but the chips are slightly stale and cold. Salsa is nothing to have an epiphany over, but it’s edible. We receive our drink orders (which are both for me) of a Passion Fruit Mojito and the Aguas Frescas  of the day, Watermelon. The frescas is warm, but after a few swizzles of the the straw becomes drinkable. I like the watermelon taste and it’s not too sweet. The mojito tastes like a regular mojito, with no strong passion fruit taste. If I wouldn’t have ordered it myself, I wouldn’t have guessed it had passion fruit in it. The menu is thoughtfully left with us so we can read along with our courses and muse over other dishes we might have chosen.

I’ll list our courses in order with responses to each one to break it up a bit.

The soup was served in small cups with a drizzle of huitlacoche vinaigrette on top. It tasted very similar to creamed corn, so if you don’t like creamed corn, you won’t like this. The vinaigrette, which was explained as “a mexican truffle oil […] is taken from a very rare mushroom that grows on corn”, and the sips which had it were exponentially better than sips without.

The mahi mahi ceviche in a sauce made of ketchup or tomato (I got two different answers) was okay. It would have tasted alright on it’s own if it hadn’t have been pair with the rock shrimp ceviche, which was great. The mahi mahi had a very strong fishy taste, which brought to mind the question of freshness, and the flavors of the sauce fell flat. The rock shrimp came to life in the orange juice-jabanero ceviche, which did a great job of balancing sweetness with spice. Both the mahi mahi and the shrimp were blanched for about five seconds before being added into the mix.

The empanada dough itself on the outside was too thick and fried too deeply for my taste, but this was one of my favorite dishes (not that you can go wrong with chorizo). I really liked the play of sweet and savory in this dish with the raisins, almonds, oaxaca cheese, crema fresca, and chile chipotle. People that do not like having sweet sides or sauces with their proteins will not like this though.

I did not like the texture of the corn masa cake in this dish, and even though it had a lot going on (black bean puree, shredded napa, blood orange-habanero glaze, pickled onion) I didn’t really taste it. This was due in part to the plating of the dish–the masa was piled so high with layers that it was impossible to get everything in each bite, which was in my opinion a disservice to the dish itself.

This was another dish that seemed to have so much going on that it just fell flat. The prawns themselves were perfectly cooked and had a great texture. The white rice sauteed with market vegetables seemed bland despite the fact that there were so many ingredients. The bites with the fresh sweet corn saved this dish for me.

If I had read the menu description of this dish, I would not have ordered it. But on the plate, everything came together perfectly. The adobo marinated pork was juicy and cooked to perfection with a great texture. It played well off of the pineapple in the dish, even though I thought the two would compete more then complement. Served with a tomatillo salsa (which we were informed is actually a berry!).

The story for this dish is about how the chef is from Northern Mexico and spent ten years in Kansas perfecting barbecue. The meat was very tender and delicious, but the sauce overpowered the meat itself.

Apparently, this is one of the favourites at La Sandia, even though it’s a side. This, in theory, is a great dish–I could see where it was going. As it was being explained to me, I understood how it was supposed to taste, but it didn’t taste that way. The sweet corn filling walked the perfect line of sweet and savory, but I was lost when the topping came into play. The cubes of cheese and cilantro did not integrate at all with the corn. In fact, when I tried to take the first bite, all of the (poblano?) cheese cubes bounced off of the top of the tamal and onto the plate, taking the cilantro with it. In theory, the cheese is served warm on top of the corn and adds a real creaminess to cut the sweetness the corn has. In reality, the cheese was cold, hard to cut (even with silverware), and had the consistency of tofu. The corn itself is similar to the taste of warmed-but-not-yet-baked-into-a-corn-muffin cornmeal.

I thought I would like this, but it tasted as if someone took a container of condensed milk, burned the bottom, and turned it upside down on a plate. The pineapple-strawberry pico de gallo on top was nice, but did nothing to cut the richness and odd flavor of the flan. I thought Mexican desserts were supposed to be “light” ?

This dessert was odd. The chiffon cake itself was shockingly cold but the sauce was warm. The sauce comprised of three milks (including evaporated and condensed) was very interesting and I still cannot make up my mind whether I like it not.

When we expressed that we liked the two desserts, but they weren’t amazing since we’re more “chocolate people”, our server brought out this little dessert out of empathy because he “likes chocolate too”. The cinnamon ice cream made with goats milk was amazing, but the brownie tasted like it was sold by a place that doesn’t quite specialize in baked goods.

It’s unfortunate that La Sandia is in a mall. The type of customers that frequent Tysons Corner generally aren’t going to be the type to try real Mexican food, down a shot of one of their 100 tequilas, or appreciate the stylized decor. And unfortunately, the clientele of a restaurant becomes part of its decor. As a result, I see La Sandia as a restaurant still struggling to find its identity. One thing that I do appreciate is that while they acknowledge that patrons are looking for a quick bite of fajitas (similar to Don Pablo’s or Rio Grande), they encourage diners to try one of their many dishes that blend familiar territory with fresh and new ingredients. And there are great dishes to be had.

La Sandia is on a mission, however, to stay true to Mexican cuisine, and is doing the right thing by reaching out for feedback and changing as a response. They are participating in this summer’s restaurant week with a menu that rings of Oyamel (grasshopper tacos, beef tongue tacos, excellent drinks) and are undergoing another menu change in September. La Sandia brings comfort food mixed with downtown class to Northern Virginia, but I’m not sure that this shopping mall is ready for it. 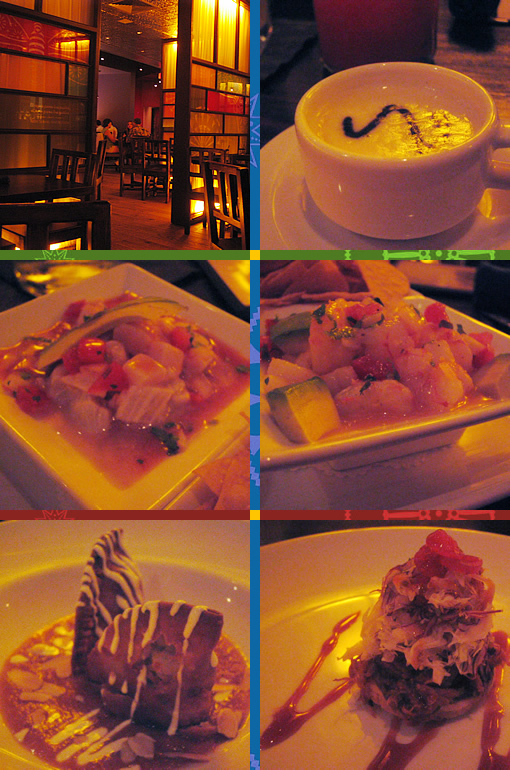 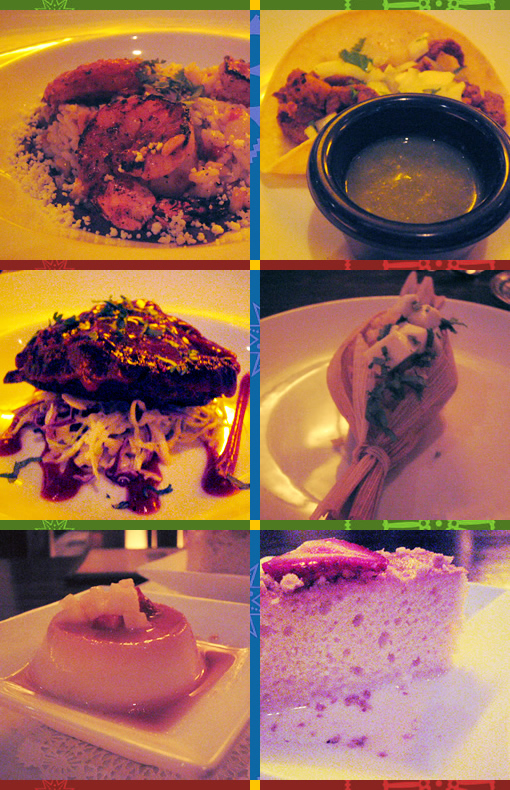