This is a guest post that I wrote for Just Bento. It was originally published there on October 28th, 2009.

Diseases that involve blood sugar often creep up on you. It wasn’t until my mother was older and my younger sister and I were well into our teens that we were exposed to hypoglycemia and Type II Diabetes. Type II Diabetes is a growing epidemic in the world, and most people don’t know that it’s actually preventable. My mother’s poor diet habits led her hypoglycemia to develop into Type II Diabetes. My sister and I both have hypoglycemia and are in trying to keep Diabetes at bay. Unfortunately, in a culture that advertises unhealthy and fast food at the same time as a thin=attractive mentality, it is hard to win this war.

By eating a well-balanced diet and eating when your body tells you to (whether this is three, four, or five times a day), great strides can be taken to eliminate the risk of developing Diabetes. I am currently in the process of helping my sister understand not only her disease and its risks, but also valuable life skills such as cooking and budgeting. My sister is just starting college and she needs to be able to budget the adequate time and money needed to planning her meals, as well as understanding what types of food she should and shouldn’t eat. I think bento does a great job of meeting all these requirements because it’s fun, transportable, environmentally friendly, economical, and is a medium for learning.

The first step for my sister was to acknowledge that she needs to start taking better care of herself. We set in place some emergency foods that she should have on hand at all times (mini-energy bars, ginger candies, glucose tablets, etc). The amount and type of “emergency” foods will vary for everyone depending on the severity of their blood sugar issues.

The second step is to make it as easy as possible. My sister knew what bento was long before she started making it herself since made them for her and my brother during middle and high school. She was familiar with the portions and equipment, but had no idea how to plan meals. I took her to the local Asian super market and walked her through the aisles, seeing if she could pick some things out on her own. We left with some simple and filling dishes, including curry, okonomiyaki mix, noodles, and furikake. 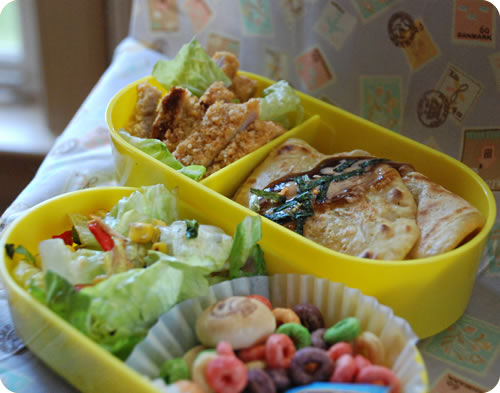 Before teaching her how to make dishes, I opened the refrigerator and showed her how there were leftovers that could be reused into bento. It was important to let her know that bento can be comprised of leftovers from the night before or recreated as ingredients. This was key to making bento seem less over-whelming. We scrounged through the refrigerator and found vegetables for okonomiyaki and leftover chicken cutlets to dress some restaurant-bought salad. I watched as my sister made the pancakes and then quizzed her on what she thought should go into the bento to make it more balanced. So far we had some fresh light vegetables, protein, and hearty pancakes. We agreed that something to snack on that wasn’t too un-healthy was needed and decided on some fruit cereal, chocolate candies, and a ginger candy. 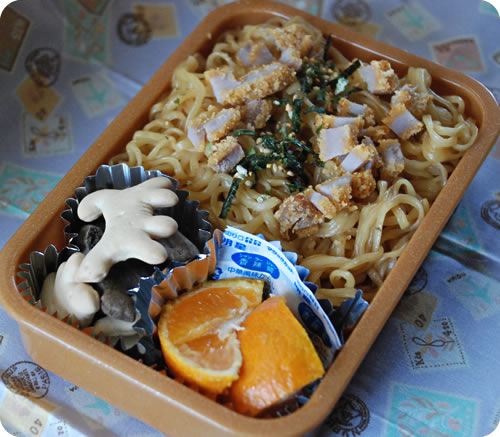 My sister only requires bento two to three times a week because of her current class schedule. I took this opportunity to show her that you can make bento whenever you have free time, not only the night or morning before classes. I had done most of the work in the first bento (above), but I made it my sister’s job to execute the second one as independently as possible. She decided on sesame noodles topped with some of the same chicken in the other bento and some furikake. Even though these are packaged noodles, I told my sister she could drain almost all the broth to make them healthier. After the noodles, my sister was stumped as to what to put in. I asked if she had any fruit and we cut up some oranges. While I placed the oranges into a foil cup, she remembered that some black and white animal crackers would go well with the bento—noting the color contrast. I smiled as she gently layered the crackers into another foil cup.

My sister had never had these particular noodles before, and she loved them. Bento is another way to try great foods, since half of the battle is presentation.

I periodically check up on my sister to see how things are doing in school, including how her bento-ing is going. She often asks me questions about what things go together, or how to transport a particular dish. I keep reminding myself that a few months ago my sister never packed her lunch and only knew how to make grilled cheese. She’s come a long way in such a short amount of time. I’d like to believe that bento has made her more conscious of money, time, and her health. Most importantly, she hasn’t gotten sick since school started and she’s feeling more comfortable in the kitchen.

Even though these bento might not be the most beautiful, colorful, or well put together, I try to stress a balance that is obtainable by those that are starting out in the kitchen.