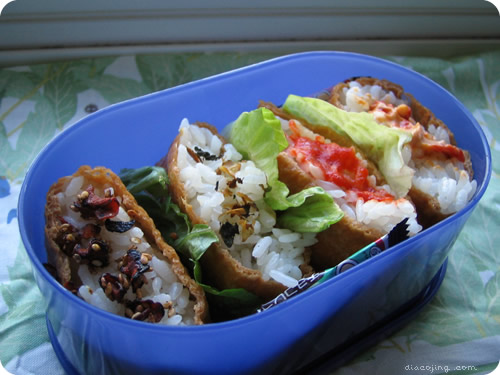 I went to the Japan-America Society’s annual O-tsukimi festival this year. Since I am a member, the cost was only $20 for entry into the National Arboretum after hours, sake tastings, calligraphy, koto music, obon dancing, raffles, and daifuku. There was an option to purchase bento through JASW (which I found out was done by Tako Grill), but the prices were steep! ($20 per person for members)

Since we were probably going to go out after o-tsukimi, I packed a light bento of four inari-zushi. Each inari is seasoned differently. From left to right: yuzu kosho and homemade carrot-sesame furikake; salted ume paste with homemade radish-bonito furikake; sriracha; roasted red pepper hummus. I also tucked two little Anpanman chocolates into the bento.

It was nice and brisk outside, warmer than I initially thought it was going to be. I had thought the festival (Oct 3rd) was going to be much cooler, so I didn’t wear my yukata. I enjoyed touring the bonzai gardens, but didn’t see anything that would cause me to drive all the way out to Anacostia again. The pillars featured below were removed from the Capital building’s East side when the recent expansion was done.