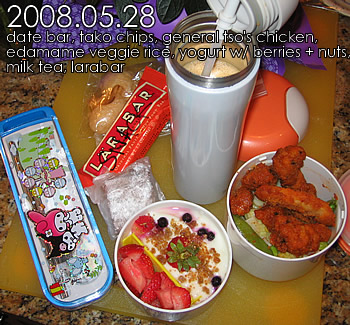 This was a quick and easy bento. General Tso’s Chicken (er… Chicken nuggets) with some edamame rice [edamame, rice, corn, peppers, peas]. For fruit, I cut up some strawberries, and mixed them with some frozen blueberries. Lemon yogurt and some grape nuts. I made date bars from scratch because I had some dates left over from the Sara Snow oatmeal “cookies”. I also got my sister this cute fork/spoon/chopsticks holder because she always looses them otherwise.
I had gotten milk tea for myself, but my sister wanted to try some so I sent her to school with my ultra-thin thermos (she didn’t drink it all!!). She also special requested these octopus chips. 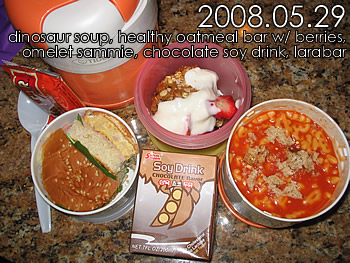 I haven’t made a soup bento ever, and I haven’t made a omelet ina while. I used my special omelet pan I got from Japan, but I put too much ham and spinach in so I had to add another egg. I had to cut the sandwich to fit so I got to eat the extras and it was SO YUMMY.

Heat some butter in the pan. Put one egg in, rip up some leaves of baby spinach and almost one full slice of ham. Let it cook a little bit and then add the second egg. Before you add the second egg, mix in about 3/4 tablespoon soy sauce and a dash of pepper. When the omelet is cooked, place it on the bun. Spread a thin layer of okonomi sauce, then place some baby spinach leaves and a slice of ham. Close bun. Enjoy~! 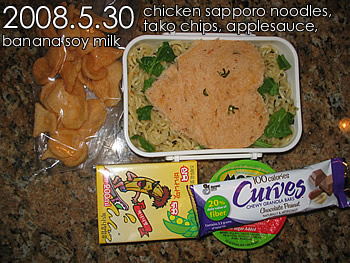 This was a REALLY super fast bento. My sister’s sick so she only ate half the noodles (my brother doesn’t eat bento anymore, so I gave her the whole container of noodles. I usually only give her half).
My brother and sister REALLY like these noodles. It’s just one pack of instant noodles (cook in the pot kind) that I drain and mix some furikake or seaweed in. I also added some baby spinach (can you tell I’m trying to get rid of it? ^^).

We got some super yummy tomato basil bread from Panera so I cut it into a heart and it fit perfectly on top. I added a Nori face with one of my punches.